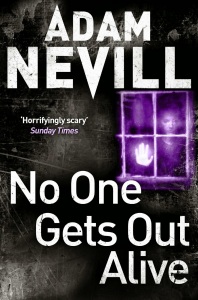 I’ve been raving about Adam Nevill for ages.  And in a good way.   Ever since I picked up his earlier novel “The Ritual”, I’ve been hooked on the guy.  Adam is one of the torch carriers of horror, for me and always hits that glorious sweet spot of combining genuinely frightening tales with thoughtful character driven plot, and he does it with originality too.

His latest offering, “No One Gets Out Alive” may just be his best book yet. “The Ritual” greatly impressed me because, having been a resident of Sweden for five years, it was clear that Adam had done his homework (and indeed field work) into capturing the isolation and desperation of getting into trouble in the harsh Swedish north when you don’t know what you’re doing.  And “The Ritual” hit all the right notes as a direct result.
With “No One Gets Out Alive”, he achieves it again with an unflinching and uncomfortable commentary on how poverty and exploitation can lead to you becoming the perfect victim.
Stephanie Booth is a hard up, borderline poverty stricken young adult in the Midlands, struggling with the aftermath of a failed relationship and the direction-less malaise that affects many post University students.   Bungling her way from poorly paid temp agency job to job to make ends meet, when she sees an ad to rent a room at 82 Edgehill Road for a fraction of the going rate, it seems like a gift horse.
But very quickly, we learn that things are not as they appear to be at 82 Edgehill Road.   We are soon introduced to the despicable and abhorrent live-in landlord Knacker Maguire.    There’s also something sinister and supernatural lurking within the walls of the house.  Something Stephanie becomes aware of almost immediately.  So pack your bags and leave, I hear you say?    Not so easy when you are penniless, desperate and have literally nowhere else to go.   Add to that a manipulative, bullying Landlord who always seems one step ahead of Stephanie and knows exactly how to play her.   As the house begins to steadily reveal itself and life could not appear to get worse for Stephanie, Knacker’s vile and psychopathic associate, Fergal turns up.
I won’t say more about the plot as to do so would be doing the book a little of a disservice.  What we have in “No One Gets Out Alive” is a fantastic blend of supernatural horror with some memorable characters and truly creepy moments.    Nevill offers a credible, at times soul destroying take on what it is to be truly hard up, down on your luck and in that spiral of decline that is all too easy to for the poor and vulnerable to get sucked into and the cruel parasites who are always there to take full advantage.  As a reader we feel genuine empathy for Stephanie in her desperation, and we never stop rooting for her.
If you are a fan of the horror genre, this novel is a must read and my pick for 2014, albeit it’s an unrelenting and at times brutal story which takes you firmly by the lapels very early on and gets firmly, and unapologetically, right in your face.
Jonathan Wood