Bird Box sits nicely in the genre of haunting apocalyptic fiction and ticked all the boxes for me on reading other reviews and plot summations, so I had no hesitation in picking it up.

Our central character is Malorie, who watches with despair as an unspecified event /phenomenon occurs, beginning slowly at first, then escalating to almost pandemic proportions.
People begin committing acts of inexplicable violence, towards others and themselves and for no apparent reason.    The only correlation between these acts of violence are that the victims saw something before they descended into acute madness.   This leads to mass paranoia within non-affected people who turn to wearing constant blindfolds, locking themselves up in their homes and keeping their eyes closed most of the time to avoid the same fate.   Society and the rule of law rapidly begin to break down.
Malorie’s story is cleverly divided into two parts which interweave.   The present, in which Malorie has has been holed up in a ramshackle house, the ward of two young children, a boy and a girl, for four years.  Living in squalor and poverty, windows boarded and all blindfolded to protect them from an unknown terror, Malorie has been preparing the children for the 20 mile journey that they must attempt by rowing boat along the river to an almost mythical sanctuary.   Their only protection is the blindfolds that they all must wear.
The other part of Malorie’s story deals with the events prior and during the event outbreak, how she came to seek refuge in the house in the first place and the story of the other survivors that she shared the house with.
Bird Box is beautifully written and Malerman creates a poignant and haunting atmosphere which keeps you hooked from start to finish.     Here we have an original, understated and solemn take on the apocalypse, the desperation of survivors of this phenomenon and their constant struggle to deal with everyday life, who live effectively as blind people should they attempt to go outside.   The characterisation is excellent and Malerman invests whole heartedly in the character of Malorie.   As a reader, we get to see effectively two sides to her.  Past and present.
Malerman manages to toe that fine line of offering just enough to keep you hunting for explanations as to the apocalyptic event, but also just engrossing you in the eerie and at times heartbreaking emotion of people truly lost and struggling to come to terms with the world as it now exists.   Part of the novel’s sparkle is the constant unease of not knowing what is out there, stalking the streets and invoking terror and paranoia in the minds of survivors.
One or two of the character plots were slightly predictable in my view, but that should not detract away from the fact that this is a finely crafted novel, delicate and melancholic when it needs to be yet also filled with dark, almost hallucinogenic imagery which leaves a lasting impression.
Highly recommended. 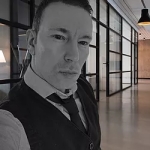